The Shifting Landscape of Teaching and Learning Geometry

The word geometry literally means “measuring the earth.” Anciently, rope stretchers surveyed the land using knotted ropes. When the rope was stretched tight so it didn’t sag, the rope formed a straight line. When one end was held stationary and the other end of the stretched rope was moved, it traced out a circle. The equally spaced knots on the rope could be used to mark out right angles by forming a triangle from 3, 4 and 5 segments. These straight lines, circles and right angles could be used to construct other shapes on the land, such as rectangles and squares. Euclid formalized this ancient knowledge of land measurement by justifying these constructions based on a few assumptions, his 5 postulates of geometry, and the methods of logic articulated by Aristotle.

So why did the authors of the Core Standards shift the foundations of geometric thinking from a focus on measurement to a focus on transformations? This is most apparent in their redefinition of congruent figures in terms of a sequence of rigid transformations, rather than in terms of equal measurements. Figures are similar if the transformations that carries one figure onto the other includes a dilation to enlarge or shrink it, and the fact that the sides of the figures are proportional is a consequence of the dilation.

As I have been writing this blog post, I have shifted the page of text from my computer screen to a second auxiliary screen. I have stretched the page by dragging on a corner of the document window, and enlarged the text by dragging a slider to a higher magnification. I have pivoted the monitor to eliminate the effects of the sunlight that was reflecting the images of the window blinds on my screen. I have paused my writing for a moment to watch a preview of a new CGI animated movie. I have used two fingers to enlarge an image on the screen of my phone so I could see some details in a picture of my grandkids headed off to their first day of school. I have toured a home for sale in our neighborhood by scrolling through a sequence of pictures, swiping up and down, left and right, trying to make sense of a place I have never visited. In other words, my morning has been filled with actions that could best be described as transformations of objects and images.

Since the Core standards refer to translations, rotations and reflections as rigid motions, many teachers and textbook authors include the preservation of angle and distance in their definitions of these transformations. However, we are actually assuming that moving points in a plane using descriptions like “In a translation all points move the same distance along parallel lines” will preserve angles and lengths of corresponding measurements in the image and preimage. Declaring that the transformations are rigid implies that we believe this assumption to be true, since we have observed that sliding, flipping or turning an object doesn’t change its size or shape. The rigidity of shapes undergoing a translation, rotation or reflection is a much more intuitive postulate for building a geometric system than the experimental postulates that underpin more traditional approaches to high school geometry.

Based on the definitions of the rigid transformations and the postulate that they preserve angle and distance measures, we can prove the triangle congruence criteria and the properties of angles formed by parallel lines cut by a transversal as theorems. Once students have established these foundational ideas they can prove observations they have made about shapes such as triangles and parallelograms using either arguments based on transformations, or arguments based on congruent triangles, parallel lines and transversals. Students can even justify the construction techniques of the ancient rope stretchers. But they can also envision the work of CGI animation, robotics and the mechanics of things in motion. 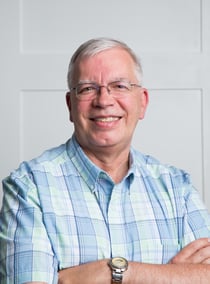 Scott Hendrickson
Scott recently retired after serving 14 years as a teaching professor in the Department of Mathematics Education at Brigham Young University. Previous to this assignment, he taught for 26 years in public education as a high school mathematics teacher. For 8 of those years he also served as a K-12 district math specialist. He is a past president of the Utah Council of Teachers of Mathematics and served 7 years on the UCTM board. Scott is a co-author of articles appearing in *Teaching Children Mathematics, Mathematics Teaching in the Middle School, and Teachers Engaged in Research: Inquiry into Mathematics Practice, grades 9-12. *He was the 1994 Utah Teacher of the Year, and a recipient of the 2003 Presidential Award for Excellence in Mathematics and Science Teaching.

Scott currently serves as an author and consultant for Mathematics Vision Project and the newly released Open Up High School Mathematics curriculum published by Open Up Resources.